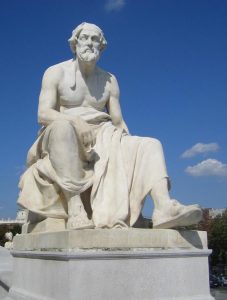 The Athenian historian Thucydides, active in the late 5th century BC, is famous for his History of the Peloponnesian War, an account of the war between Athens and Sparta that consumed the Greek world from 431-404 BC. In addition to a detailed account of the battles and campaigns of the war, Thucydides paints a vivid picture of the individuals who played a major role in the war, and of how the governments of Greek cities were stressed to their limits in this unprecedented conflict.

Desperation, Demagoguery, and Fear: The Death of Reason (Tyler Thorne, 2019)